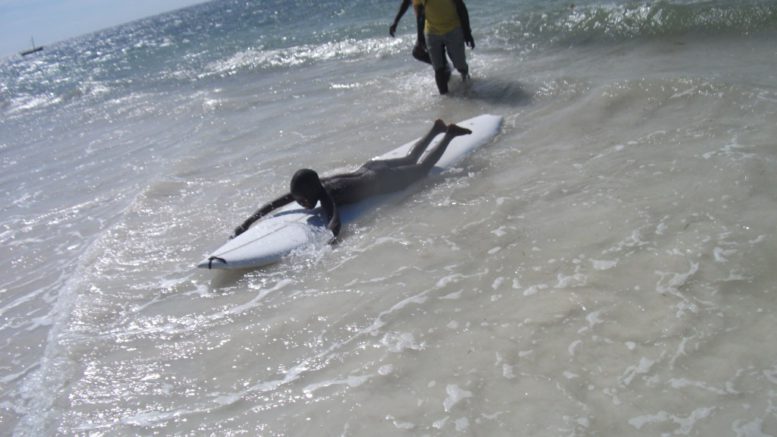 Close to 200 participants made a debut in this competition, with the 10/11 age group recording the highest number of athletes. Loreto Convent Mombasa had brought a large team, thank to their coach Mr. Albert Oketch.

The event was a great success put in consideration that this was held for the first in Kenya and most of the organizers have never witness such competitions. The KLF Mombasa branch chairman Babuu Muoki and his committee of Jackson,Caleb,John,Omar Timimi managed to secure most of equipments needed for the events,they secured surf boards ,rescue tube,ski,rescue boat,scuba gears, bouys,P.A and the venue.special thanks to babuu mouki and his collegues who worked tireless in pre event to post event.

After oceanman event, we took one hour lunch break and resume with beach sprint event then beach relay and finally the beach flag. Surf ski event was omitted as there were few paddle/oar for the ski events.

I personal enjoyed the events and did not expect that high level organization from our Mombasa branch having all required equipments in place; with the conclusion of the event we made our tentative selection of athlete -beach events for the world lifesaving championship, the rescue 2012 in Adelaide, South Australia. We hope to make final selection for the rescue 2012 in June national lifesaving championship.

We are looking forward for another beach lifesaving event to be organized in June 2012 by the KLF Mombasa branch.