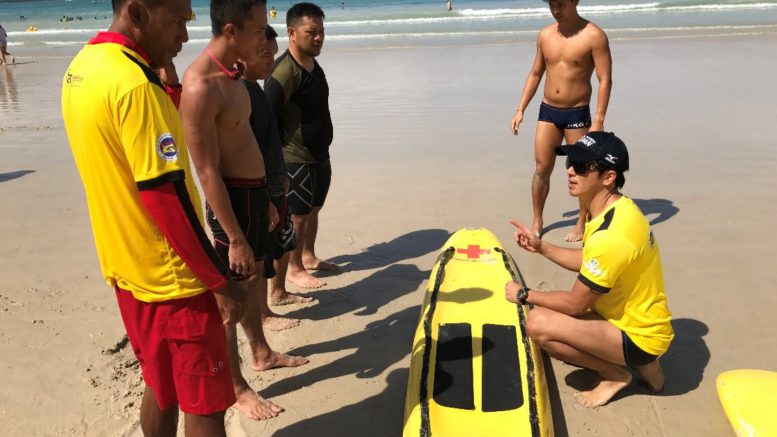 The aim of the workshop was to stimulate and facilitate increased lifesaving sport activity through focusing on coaching to build local capacity in beach/ocean lifesaving sport knowledge, skill and networks which with ongoing guidance and assistance will lead to an improved sporting opportunities and also contribute to a reduction in drowning death and injury across the Asia Pacific Region.

Mr Norm Farmer in his role as President of the ILS Asia Pacific Region stated that the workshop has started to address one key aspect of the ILS Asia Pacific Regional Plan 2016 to 2020 in developing ‘a coordinated approach to working together to develop lifesaving sport athletes, officials and event managers, increasing the number and quality of sport development opportunities by linking to existing events, running workshops and engaging in the Lifesaving World Championships in our region.’

The Workshop was attended by 30 lifesavers and coaches from 10 ILS Full members from Chinese Taipei, India, Indonesia, Japan, Korea, Malaysia, New Zealand, Philippines, Singapore and Thailand. A special invitation was made to lifeguard operations in Nha Trang and Da Nang Vietnam a developing lifesaving country and from which it is hoped a new member of the ILS will shortly emerge.

The Workshop consisted of a broad range of surf lifesaving coaching theory and practice under the coaching leadership of Scott Bartlett and Daniel Grant from Surf Life Saving New Zealand and Seiji Iinuma from Japan Lifesaving Association. Mr. Iinuma said ‘I had a wonderful time over the few days and many new friends made. Let’s continue this project leading to Asian development’. We were also fortunate to have assistance from David Field from Cudgen Headland SLSC in NSW, Australia who has much local experience and provided great support to the coaches and the Workshop. David also remarked this was ‘the most enjoyable lifesaving activity I have ever done’.

The Thai Life Saving Society (TLSS) and the Phuket-Thai Life Saving Association (PTLSA) were excellent hosts. In particular appreciation is extended to Dr Ithikorn Khamdej, President of TLSS and also to both Mr. Prathaiyut (Khun Nat) Chuayuan and Ms. Vitanya (Khun Pik) Chuayuan of the PTLSA. The timing of the Workshop enabled the participants to put their learning to good use in assisting with the Phuket Kids Water Safety program on Patong Beach on Friday, 9 December. On the final day the Workshop participants had the opportunity to put their learning to good use at the 5th Phuket Surf Life Saving Competition also held on Patong Beach.

The ILS Asia Pacific Region is planning to host future developmental workshops over the next four years in a range of lifesaving disciplines and also in drowning prevention.