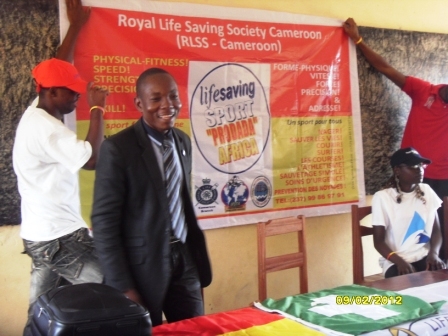 This first visit in this school was successful and a materialization of RLSS – Cameroon Branch’s National effort for child drowning prevention, water safety and lifesaving education and training as well as a demonstration of its leadership in Central and West Africa Region in child drowning prevention, water safety, survival swimming and lifesaving.

The training was held within the school premises, it was the first of this kind to be organized in Douala as well as in Cameroon soon after the first International water safety and survival swimming teachers training course held in Kribi last January 09 – 14, 2012.

The overall number of school children who were present at this first educational visit is 113 children. At the end of the visit, children were given feedback sheets and were ask to fill them in and to return them to RLSS – Cameroon’s team members who visited the school. According to RLSS – Cameroon Branch’s President Justin Bakinga, all children from this school are eager to learn water safety, survival swimming skills and lifesaving skills, to be lifesavers and prevent other children drowning in the near future. In the same feedback, these children would like to be RLSS – Cameroon Branch’s member to help saving lives and preventing drowning.

RLSS – Cameroon Branch started drowning prevention, water safety education, and lifesaving training programmes in Cameroon from the scratch. To develop lifesaving programmes effectively within Cameroon, Central and West Africa Region, the Society is relying on the help and support from more advanced and more developed lifesaving organisations from around the world.