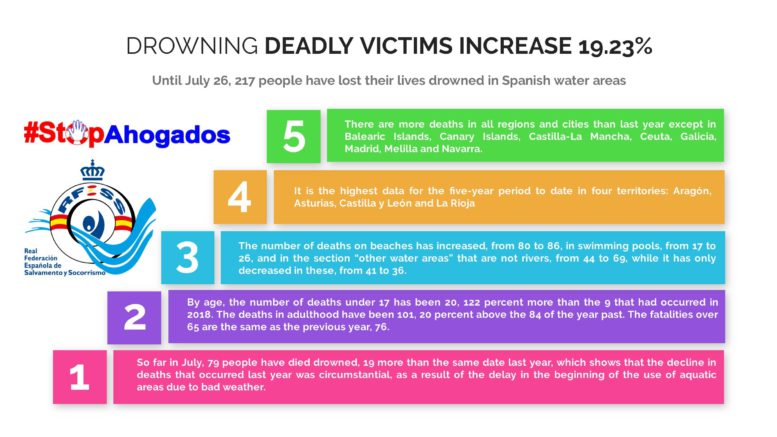 Deaths by drowning in aquatic areas in Spain have risen by 19.23 percent so far this year in relation to the same date of 2018, as revealed the president of the Royal Spanish Lifesaving Federation, Isabel García Sanz, during a visit on July 27 in Santander to the workshops of the Prevention Campaign of Accidents in Aquatic Areas.

“This makes us ratify our conclusion that the drop in deaths that occurred last year was circumstantial, as a result of the delay in the beginning of the use of water areas, in general, and Spanish beaches, in particular, as a result of bad weather that lasted during the first months of the year, including Easter holidays”, said García Sanz.

She called for the implementation of a State Plan for Aquatic Safety as a result of a basic legislation that is applicable in the whole of the national territory, and the creation of an administrative structure in the General State Administration, at least with the level of Management General, who is responsible for its execution with skills in training, prevention and regulation.

Royal Spanish Lifesaving Federation has been carrying out the #StopAhogados prevention campaign of accidents in water areas since 2016, and since one year before elaborates the National Drowning Report, the only statistic that in Spain includes the fatalities of unintentional drowning daily.