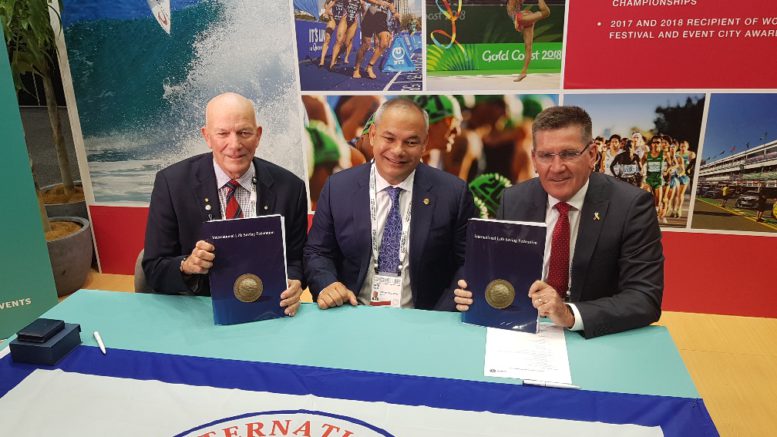 During the SportAccord meetings in Broadbeach on the Gold Coast in Australia, the International Lifesaving Federation (ILS) and Surf Life Saving Queensland (SLSQ) signed the agreement to host the Lifesaving World Championships (LWC) 2024.

Watched by the Gold Coast Mayor Tom Tate, the ILS President Graham Ford AM and Acting CEO of SLSQ Kris Beavis signed the agreement to host LWC 2024.  With the pool events being held at the Gold Coast Aquatic Centre at Southport and the ocean events at Kurrawa Beach in late August/early September 2024, it promises to be one of the biggest international sporting events held in Queensland since the Commonwealth Games of 2018.

Mayor Tate expressed his great pleasure that the ILS will be bringing the Championships to the city and promised that the Gold Coast will provide the warmest of welcomes to participants from all over the world.

President Graham Ford AM highlighted the exceptional quality of the facilities at Southport and Kurrawa that will ensure that LWC 2024 is a huge success.  With 10 separate World Championships events being conducted it is certain to be a very exciting time.  In response, on behalf of the hosts, Kris Beavis thanked the ILS for the confidence being placed in SLSQ and the Gold Coast to deliver this important event.